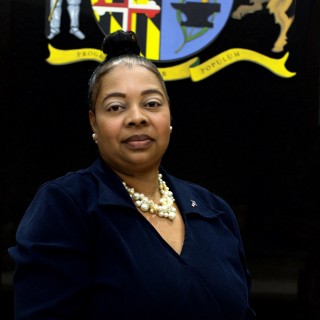 In June 2011, Councilwoman Valerie Nicholas was appointed by the Laurel City Council to complete the remaining six-month term of a retiring Council Member.  In November 2011, she was the first African American female to be appointed and then elected to the Laurel City Council.  On November 7, 2017, Councilwoman Nicholas was re-elected to her fourth term, winning with the most votes in the City.  To date, she is undefeated!

After volunteering for many years as a community advocate, in 2007, Councilwoman Nicholas formed, Love Is Not Enough, Inc., which is a tax-exempt, nonprofit organization that addresses the issue of domestic violence.  She, too, is a victim of domestic violence, child abuse, and was severely bullied while in junior high and high school.

In 1986, she moved to the DC area from Roanoke, Virginia with only $4.73, in her pocket.  Since that time, she has completed 20 years of Federal service which includes her position as a White House appointee, serving two former Presidential appointees under the Clinton Administration.  Prior to that, she worked in several roles on the U.S. Senate Commerce Committee, where former Senator John C. Danforth was the Ranking Member.

Over the years, Councilwoman Nicholas went from one abusive relationship to the next.  She grew up in an abusive household where she witnessed her mother’s death at eight years old.  By the time she was 11 years old, she was the bartender at her alcoholic father’s nightly parties where she was physically and sexually abused by her father’s friends.  Shortly thereafter, her father became a diabetic, blind and a double amputee, he died years later.  During her early years in DC, Valerie became an expectant mother, but experienced the death of her unborn child due to repeated abuse.

Today, Councilwoman Nicholas is often referred to as the Wounded Healer, because she uses her own wounds of abuse to help empower and heal the wounds of others.  Currently, she works at Laurel Regional Hospital, where she leads three departments which includes Volunteer Services, Patient Relations and Chaplain Services, where she also serves as a Chaplain.  In her community, she feeds the homeless daily and helps people in need of emergency services.  In addition to working full-time she served as her late brother’s caregiver.  Standing by his side until he took his last breath, she has witnessed firsthand what faith, love and true commitment is all about.  Currently, she serves as a mentor to many and a motivational speaker before diverse audiences.  Lastly, she is currently working on a series of books that gives affirmation to her life which is now free of abuse.